I went to a class at Duke Gardens the other night. One of the presenters described how they were planning to install a new white garden, and felt it was imperative that they visit the famous white garden at Sissinghurst

to see how to do it properly. So Duke sent them. We should all have such a boss.

I have been to Sissinghurst, actually–five years ago. It was miserable weather (unsurprising) on the day of our visit but it demonstrated perfectly why England has such glorious gardens and ours suffer by comparison. The cool, mild weather and perpetual rainfall make for easy growing conditions (oh, their ferns!). 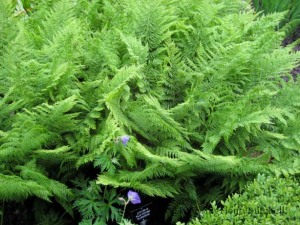 Yet, apparently, even though it’s frequently moist the humidity doesn’t promote black spot and other diseases to the degree we have here. I suppose it’s because it’s humid but not hot (black spot prospers at temperatures between 75 and 90 degrees F, according to Wikipedia)?

At the time I wanted to see the famous white garden but didn’t particularly care about having one of my own. Seeing the white garden is probably on every gardener’s bucket list.  I wanted to experiment with color, and white was very far down on my list. It doesn’t play well with others; it draws the eye and dominates any scene.  At the time (and not much has changed since), I was obsessed with blue, as well as with hot colors. I’ll tell you some other time about the mouth-watering hot border at Hidcote.

Now, looking back at the photos, I’m reminded again of how truly gorgeous the white garden is and why it’s copied all over the world. The stubborn part of me wanted to avoid a white garden precisely because everyone else was (is) doing it. But that’s an absurd, not to mention snotty, attitude to take. Many times (though not always) people copy an idea because it’s brilliant and absolutely worth doing. And such is the case with the Sissinghurst white garden.

One of the things that attracted me to the property where we now live was that it was a gardening blank slate. I mentioned in a previous post how the widow who lived here liked the “natural look”: It had gone so natural that soon after we moved in, we unearthed pallets of shingles, left over from an addition to the house made 10 years prior, beneath sheets of English ivy and vinca.

Future site of the white garden, now in its blank slate form. The gardenia hedge is on the left.

Parts of the garden remain that blank slate. And I have been pondering too long what to do with them. I had hoped in an earlier phase of our time here to grow a nice, confined Zoysia turf for the kids to play on. Reflecting the not-so-heroic effort I put into it, the Zoysia has remainded rather stringy and unremarkable, most likely because it doesn’t get adequate sun (have I mentioned the oaks on the property?).  So I’m invading part of the area once earmarked for the lawn and creating a small white garden, playing off the very successful gardenia hedge growing near the back of the property. I’ll let you know how it goes.

1 thought on “Sissinghurst, on the cheap”