It’s been four months since my last post. I sincerely apologize. It has been a rough summer, with ill parents to attend to. They’re finally on the mend, for which I’m thankful, and I’m looking forward to getting back in the flow.

I’m one of those irritating creatures who loves to start projects much more than I like to finish them. Consequently, I have dozens of projects around the home and garden that are about three-quarters complete. Over the past months, war broke out in my mind between my love of creating and my hatred of the resultant clutter. The war drew to its grim end recently, but I’m satisfied that the hatred of clutter emerged victorious. My long-suffering husband is cautiously optimistic. My pledge to myself, then, is to take as long as I need to tie up the ragged ends and to not start anything I can’t immediately finish. In my own optimistic moments I believe I will enjoy improved levels of sanity and mental peace, not to mention a relief from the need to apologize whenever company comes over.

The current task in the garden, then, is to move a clump of azaleas near the southeastern corner of the house. We hope to add on to this wing of the house in a year or two, and the azaleas, which are (were) gorgeous, will be smack in the way of heavy machinery when it comes to dig footings. So they’ve got to get moved.

I can’t hope to remove the two shrubs intact without the aforementioned heavy machinery, and I don’t have the cash for that at the moment. So I am taking them apart bit by bit, and starting a new garden bed in a neglected spot behind the kids’ swingset.

Decimation underway. This is the larger of the two shrubs. You can see the hole where part of it has been removed.

The patch to be moved is perhaps 100-150 square feet. It’s two plants. I don’t know the cultivars; they came with the house. The larger of the two blooms rosy purple.

The smaller, which also has much smaller leaves, is more of a pure hot pink. The two didn’t look particularly well planted next to one another, so it’s an improvement that they’re finding new homes.

This is the smaller of the two. It’s about one-third removed. Pieces of it are going into the pink-purple-yellow garden I started last year.

So far, I’ve chunked the beast of a shrub into eight pieces, which means I am halfway done with the larger one. The new bed isn’t much to look at right now. 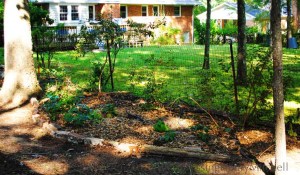 Three of the eight pieces (so far) are visible here.

It backs up to a rather tired-looking wire fence that separates my lot from the neighbor’s, but the fence belongs to the neighbor, so I can’t do anything to it. I am hopeful that once the shrubs are established, they’ll fill in gracefully and camouflage the wire fencing, at least in that spot. The vision in my mind is spectacular. Let’s hope I can deliver it.

The bed is temporarily edged in brick discarded from the kitchen redo two years ago, when we took down the masonry chimney. I can’t bear to throw much away (another of my charming habits), especially vintage brick. I’ll make it permanent in the future, but for now I need to live with it and see how I like the shape.