As I was inspecting the rain garden‘s progress a few days ago, I noticed some footprints through the soft soil.

The soil was quite squelchy from rain, and the animal’s feet sank deeply. I immediately thought, deer. Time to get out the repellants before they consume the emerging Hostas. But I wasn’t entirely convinced they were deer tracks. I thought I detected claw marks just above the main prints. A raccoon, maybe?

This morning, after I put the children on the school bus I decided to have a wander about the garden. The pollen is heavy, but the temperature was lovely and I had my coffee in hand. The Viburnum x burkwoodii ‘Mohawk’ is blooming beautifully. 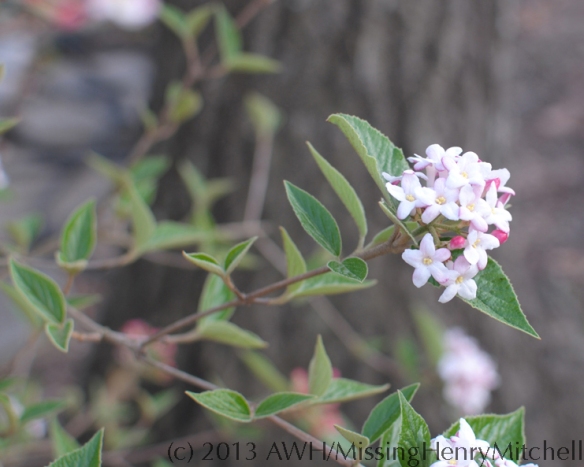 The daffodils are on their last legs and I deadheaded as I went, but the bearded iris are budding. Oak leaves are about the size of my daughter’s hand; in another week the trees will be fully leafed out.

I made my way back to the white garden to see how the variegated Solomon’s seal I transplanted a few weeks ago is faring. I noticed some very large, clawed holes in the dirt near the base of my bearded iris and heard a rustling. The culprits, exposed, froze in place.

Generally observed as a mangled mess in the middle of the road, opossums are native to this area. They are perceived as rude, cranky animals and are widely considered  (Pogo excepted) to lack the intelligence found in other mammals. Their main defense when cornered is to “play possum,” which means they freeze and hope you don’t see their fat bodies. Interestingly, I learned that this defense mechanism is involuntary. From nose to rump, this pair were about 18-24 inches long. And beyond that, they have those long, rubbery tails.

I stood still and watched them. They remained motionless for perhaps 30 seconds, then one climbed a small volunteer tree and the other scampered off into the neighbor’s backyard. The second one moved quite purposefully, across the first well-manicured lawn, then the next, until he disappeared from sight.

The poor fellow up the tree had nowhere to go. I watched him for a few minutes and wondered if I’d have time to go in the house and get the camera. After all, if he’s not terribly bright, he might not recognize his opportunity to escape.

I went in and got the camera. When I returned, he hadn’t budged an inch. 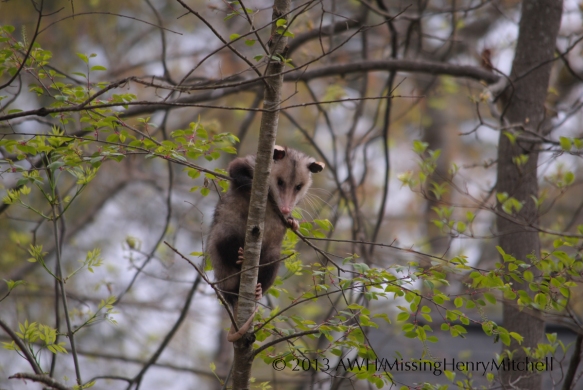 I was surprised to find them, as opossums are mostly nocturnal. They are omnivores, and I suppose they have been munching on the mice and voles in the garden, digging for my lovely earthworms, and gnawing on the roots of my plants.

The longer I watched him, the more I liked him. That is to say, I liked to observe him in the tree. I’m not interested in sharing the garden with him, or having him take up residence in, say, the kids’ playhouse, or my shed. 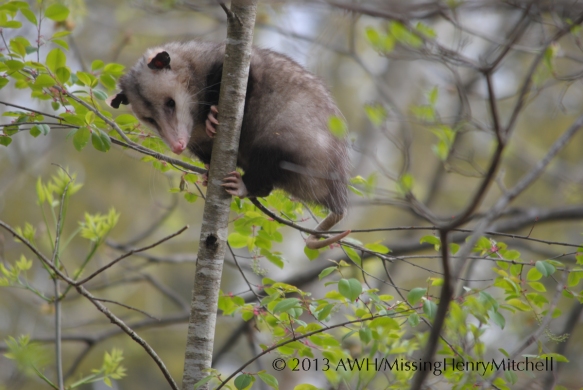 A pedicurist’s dream (look at those claws!)? Although you cannot see it in the photo, they apparently possess an opposable thumb or digit on each hind foot. This makes their tracks pretty distinctive, although I wondered if the hind foot tracks in my rain garden might not show well because of how deeply they were sunken.

And notice his prehensile tail, which he is using for stability.

Thanks for the interesting visit, mister. Don’t feel like you need to come by again anytime soon, though. You might stay with my neighbor instead, the one who leaves the carrots on her lawn.