As I mulched the vegetables yesterday before the temperatures hit 93 (34C), I thought about the second sowings I need to get started.  And I remembered that while I’d donated some seeds to the Digging Durham Seed Library back in the early spring, I hadn’t been by since the collection launched to see what my fellow citizens brought forth from their seed shoeboxes to share. 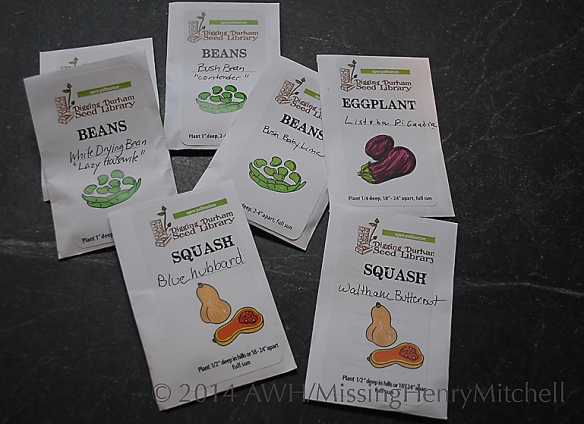 What incredible luck! This covers just about everything I had planned to grow but the sweet potato slips, which can’t fit into the little envelopes, and the Malabar spinach. If I had found Malabar spinach in the seed library, I would have fainted in surprise and been roused only by the echoing choruses of “Shh!!”

“Checking out” the seeds means taking them from the drawer and taking them home. I didn’t even have to flash my library card. As part of the deal, I will grow the crops, save some seeds at the end of the season, and return them to the library for next year’s growing season. What a fantastic way to try out new vegetable varieties.

If your local library doesn’t have a seed library, consider starting one. I can tell I’m going to be a patron of ours for as long as I can.

7 thoughts on “Digging Durham: Is this a great library, or what?”