This past weekend offered the first real break in rain we have had in what seems like weeks. If I hoped to finish the rain garden this spring it had to happen now. I have enough projects around here that are three-quarters complete.

As before, I removed all existing plant material (except the Aucuba, which is plucking along and doesn’t need disturbing), removed about 8 inches of soil, tilled in several wheelbarrows full of the manure-grit mixture, and planted back. My Rohdea japonicas are installed in their new home. Lovely, tough plants! They were prepared to bloom in their little excavated root balls, but now may stretch their roots and settle in. 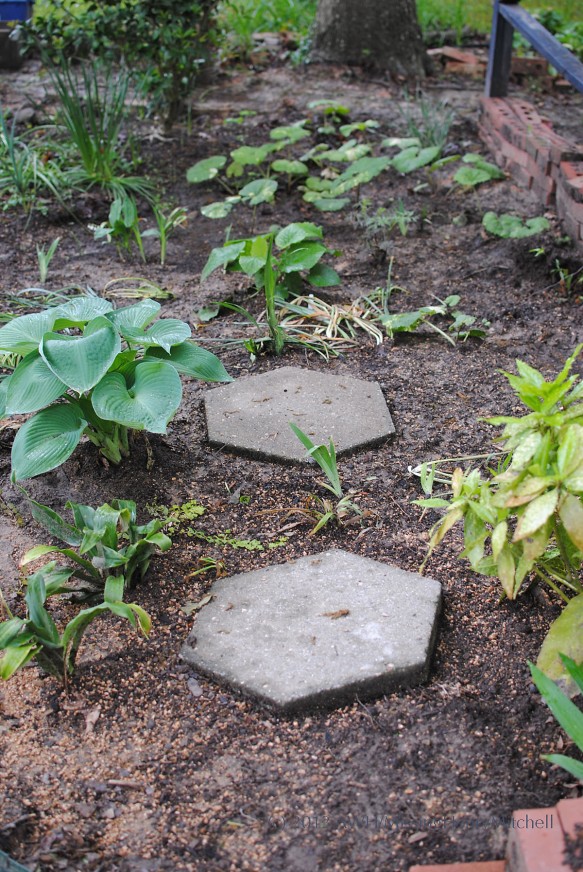 The Corylopsis pauciflora that I was looking forward to watching this spring has given up the ghost. Grieving as much for my checkbook as I did the lost plant, I heaved its twiggy lump into the compost. I may try again with it, using a smaller plant this time, or I may opt for Edgeworthia. I’d love a Magnolia ‘Butterflies’ trained as a large multistemmed shrub, but I suspect the site is still in too much shade. And magnolias always get bigger than the catalogues say they will.

Also in place are another clump of hosta my mother passed along; more of the Petasites japonicus, daffodil and bluebell bulbs. A few weeks ago I moved a Sambucus (variety forgotten) to a lower spot along the trellis and it seems to be doing well. It gets much more shade than in the past, but also much more water. It seems so far to prefer the water over the light; we’ll carry on with the experiment. The bricks stacked up along the side of the site, beneath the trellis, are mocking up another small wall I hope to install, at which time I’ll remove the trellis. Like most things around my garden, the bricks are salvaged, this time from a pathway that I removed because it was in the footprint of the house addition-to-come.

I planted seedlings of golden Alexander (Zizia aurea) and two of Senna marylandica over the weekend as well. I hope they haven’t drowned. And I may finally be able to give an adequately damp home to Louisiana iris ‘Black Gamecock.’ It has never bloomed for me in its present location in the front yard, although the foliage has hung on.

I am pleased to say that overall, the rain garden is doing its job. On Monday afternoon the garden was a pond, but on Tuesday morning it was reduced to thick mud. The stepping stones make a slurpy sound when I step on them, and water bubbles up from the earth around them. The ferns are in heaven.

The garden on Monday afternoon, post-downpour. 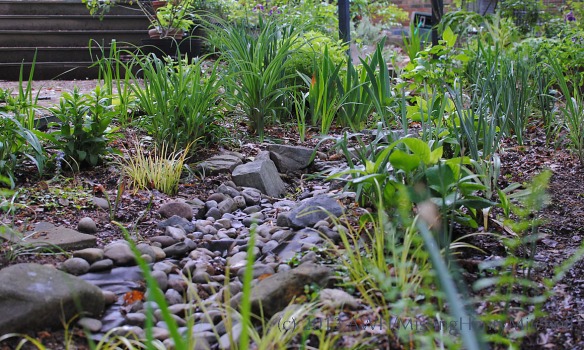 The garden Tuesday morning, boggy but bereft of standing water. 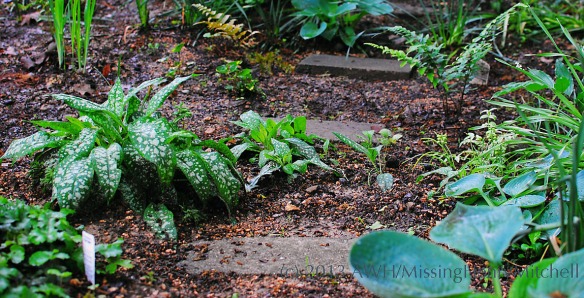 Twelve hour prior, this site was underwater. The water ran up to the polemoniums’ feet.

Carelessly, I left out seed packets of ‘Sugar Baby’ watermelon and moon vine (Calonyction Aculeatum on the packet, or Ipomoea alba Calonyction on the website) on Monday. They got absolutely drenched and the paper packets fell apart. Nothing to do but plant them. What on earth will I do with 50 watermelon seedlings?