I’ve always loved moss. Nothing else has such lush texture and color yet requires so little in the way of care. And since February’s damp gray misery persists, I decided to bring some nature indoors.

I assembled my materials: 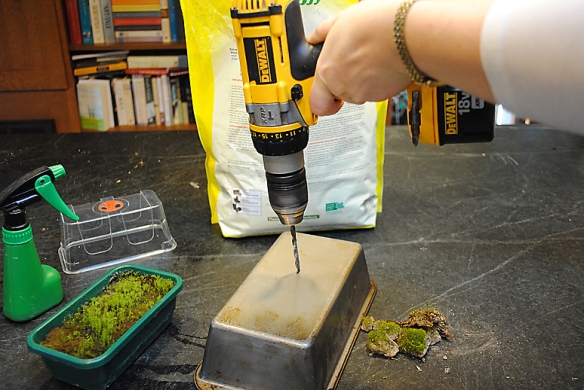 While mosses require a damp environment to grow, I’m hesitant to try growing it in a container without a drainage hole. I want moss, not mold. So I began by drilling a hole in the pan. Most regular wood bits will also drill metal and plastic. I can’t tell the size of the bit; the marking has worn off.

Incidentally, if you let go of the pan as you drill, you immediately acquire an unwieldy metal propeller. It’s better to do this when no one is around to be injured.

The hole is drilled, but it’s a bit rough. I took it out to the shed to find a file to smooth it down.

I had planned to use potting soil, similar to what had grown the moss in the first place. But on my walk to the shed, I observed more moss growing on my shady, damp clay ground. And I thought, why not give it what it likes?

This is my naturally-existing backyard  substrate. Its pH typically ranges somewhere around 4.5 to 4.8, so I don’t expect to need to “improve” the soil here with yogurt, buttermilk, or any other acidic additive typically recommended for starting moss.  The clay is quite dense, and when smoothed out, it might be mistaken (from a certain distance) for peanut butter gelato.

I want the final product to look a bit like a loaf of moss, so this isn’t enough soil. I mixed in some discarded potting soil to build up the level.

It was already adequately wet, so I simply mounded it into a hilled loaf shape and compressed it well.

This is the moss that grew where my dead spinach seeds did not. After 3 months, it is well established and peels off in a thin sheet.

What does it take to plant moss? Simply pat it firmly into place, and mist.

Mosses are ancient, nonvascular plants. They photosynthesize and take in water and nutrients through their leaves, but reproduce by spores. Rhizoids, not roots, anchor mosses to their growing substrate.

There are three kinds of moss planted here, two of which I harvested from my garden. I don’t know the identities of any of them, but I’ll try to find out. I will keep the moss moist with a daily misting. Normally I’d consider a daily task like misting a tedious chore, but I’ll keep the pan and the mister on my desk and will give it a simple spray each morning as I begin work. Over the next 3 months, it should establish itself and begin to spread. I’ll share photos as it comes along.